WJGA’s summer tournament season begins in late June and culminates with the State Championship in early August. There are several spring events and 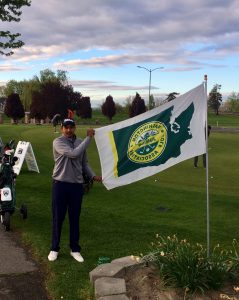 Akshay Anand holds the WJGA state flag. Akshay shot an historic round (62) of golf at Fircrest GC for his final round in 2019 and captured the overall State Championship.

post-summer events open to the statewide membership as well. Please check the 2020 Schedule regularly for updates.

Our state is divided into six districts, and each district holds four one-day qualifying sub-district events, and a two-day District Championship which is the qualifier for the State Championship.

All tournaments are conducted under the current version of the Rules of Golf.

The complete Schedule for the year.

Important information you need to know before you go!

Qualifying for your District Championship, the State Championship and Tournament of Champions - details

The WJGA Code of Conduct Rules

How to qualify for one of four WJGA Teams

IMPORTANT Rules for parents and gallery to know!