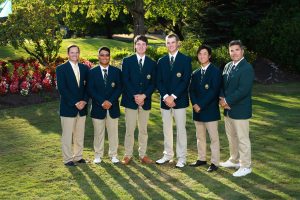 Washington Junior Golf Association welcomes junior golfers who live in Northern Idaho and in Umatilla County, Oregon. These players are a key part of WJGA, and some may wish to represent Washington on our teams. Those teams are the Boys and Girls Junior Americas Cup, the Hogan Cup and the North Pacific Junior Ladies Team Matches.

Any player who is a resident of Idaho or Oregon, and will be attempting to make any of those teams, must declare at the BEGINNING OF THE SEASON if they wish to represent their state of residence or Washington. That declaration may be made to the District Tournament Director or directly to the WJGA office at tyler.johnsen@wjga.net. Boys and girls playing in the 14-15 or 16-18 divisions will be eligible to earn points.  To be eligible for teams or for the Player of the Year Award, the player must play in at least one WJGA sub-district event in 2020.

WJGA Teams will be selected as follows:

These teams will be selected based on combined total points earned at the following events:

(4 players) Due to the dates of this year’s Hogan Cup, this team will be chosen immediately following the conclusion of the final WJGA District Championship, and based on the top four boys on the overall statewide points list. Boys playing on the JAC team will not be eligible to play in the Hogan Cup.

(6 players) This team will be selected on total points earned for the entire 2019 season. In 2020 this event will be hosted by Washington at Skagit G&CC.  In order to be eligible for selection, players must be a confirmed member of WJGA for the 2019 season and signed up to play in at least one WJGA sub district event.

Player of the Year Awards (boys and girls) will be selected on play over the entire season, including points earned at the Boys and Girls Junior America’s Cup events.  This award will be presented at the State Championship.