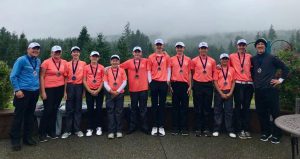 SCOTTSDALE, Ariz. (Sept. 26, 2019) – Twelve All-Star Teams, each comprised of 10 junior golfers ages 14 and under, have won their respective Regional competitions to advance to the 8th PGA Jr. League Championship presented by National Car Rental, Oct. 11-14. The Championship is being held for the fourth consecutive year at Grayhawk Golf Club in Scottsdale, Arizona.

Representing the state of Washington will be the Bellingham/Skagit All-Stars.

“The PGA Jr. League Championship presented by National Car Rental is the pinnacle of a fun and exciting postseason for these 12 talented All-Star teams,” said PGA President Suzy Whaley, PGA/LPGA. “Grayhawk Golf Club has helped us create a remarkable experience for the PGA Jr. League All-Stars and their families, and we look forward to welcoming them to Scottsdale in October.”

The Championship begins Friday, Oct. 11, with a welcome reception and skills challenge. Each team will compete against the five other teams in its division throughout the day Saturday and Sunday, with the final round taking place Monday morning (Oct. 12-14). The two teams with the best division records will compete for the national title Monday afternoon. The runner-up teams from each division will compete for 3rd place overall.

This year, a two-hour highlight show will debut on ESPN2 on Sunday, Nov. 3 at 3 p.m. ET/12 p.m. PT. ESPN will be the new broadcast network of the PGA Jr. League Championship presented by National Car Rental.

PGA Jr. League brings boys and girls together to learn and play golf on co-ed teams, with expert coaching from PGA and LPGA Professionals. Kids wear numbered jerseys and play on teams with friends, competing in a two-person scramble format that builds confidence and encourages sportsmanship. This year, a record 60,000 boys and girls participated in PGA Jr. League, and that number continues to grow as the new Fall Recreational Season is underway at facilities nationwide.

Following the Summer Season, 10-player All-Star teams were formed from a combination of players in each league. These teams moved through Section Championships in August to earn a spot at one of 12 Regionals held across the country in September. The 12 Regional Champions advance to the PGA Jr. League Championship presented by National Car Rental, which will stay at Grayhawk Golf Club through 2022.

While the focus of PGA Jr. League is primarily on the developmental nature of its Summer and Fall Recreational Seasons, the PGA Jr. League Postseason presented by National Car Rental presents competitive golfers a fun and aspirational finish to Summer Season play. As a premium, internationally recognized brand serving the daily rental needs of frequent airport travelers worldwide and the Official Partner of PGA Jr. League, National Car Rental is committed to growing future business leaders by growing junior golf. Throughout the season and postseason, National provides fun, engaging experiences for PGA Jr. League players and their families to celebrate both the accomplishments of the young golfers, as well as important life lessons they learn through the game of golf.