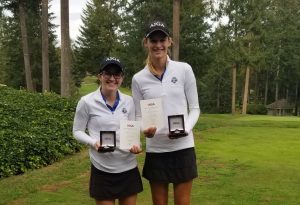 Montgomery Ferreira and Julia Bordeaux of Tacoma, Wash. combined for a 2-under par 70 to earn medalist honors at the U.S. Women’s Amateur Four-Ball Qualifier held at Canterwood G&CC on September 10th. .

Also advancing from the Women’s qualifier is the team of Gretchen Johnson and Amanda Jacobs of Portland, Ore.

The two Women’s teams will now compete in the 2019 U.S. Women’s Amateur Four-Ball, to be held April 27-May 1 at Timuquana Country Club in Jacksonville, Fla.

Ferreira won the 2018 Washington 4A High School Girls’ State individual title, and was selected to play in the qualifier for the LPGA Tour’s ANA Inspiration the past two years; Bordeaux, finished second to Ferreira in the 4A high school championship, and is Ferreira’s teammate on the Bellarmine Prep (Tacoma) girls’ golf team.

The U.S. Amateur and Women’s Amateur Four-Balls are two of 14 national championships conducted annually by the USGA, 10 of which are strictly for amateurs.