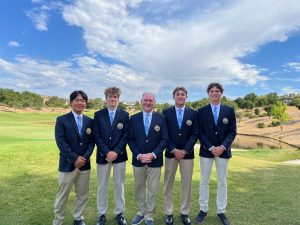 Team Washington tees it up this week in Pleasanton, CA for the annual Junior America’s Cup!

Representing Washington at this year’s tournament will be Ben Borgida, Daniel Kim, Zachary Miller and Owen Price with longtime District 6 Co-Director, Jim von Doehren, serving as captain. The event is being played at The Club at Ruby Hill with the Junior Golf Association of Northern California as the host association. Live scoring can be found at the Junior Americas Cup webpage (www.junioramericascup.com) or this direct link HERE.

The tournament is a 54-hole competition with teams counting three scores and throwing out the team’s highest score. The 2022 competition will mark the 50th anniversary of the Junior America’s Cup championship and the fifth time it will be held in Northern California.