Player of the Year

2021 WJGA PLAYER OF THE YEAR WINNERS 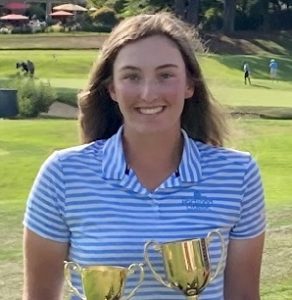 Kennedy Knox earned a total of 442 points during the 2021 season, in one of the most memorable years in recent memory. Kennedy captured the WJGA Girls’ Overall State Championship, the Washington State Women’s Amateur and the PNGA Junior Girls’ titles this summer. In addition to those victories, Kennedy also won the WJGA Players Open; advanced to the semifinals of the WJGA State Match Play and qualified for the USGA Girls’ Junior Amateur Championship. Congratulations Lauryn on a memorable year and earning our 2021 Girls’ Player of the Year!

Past Player of the Year winners
The perpetual “player of the year” trophy (given to the player with the most points at the end of the WJGA season) that resides in the WJGA office is named in memory of a now deceased, long time junior golf supporter, Jack Baty.  Jack was always ready to give his time and wisdom to any junior player wanting it.  His home was on the driving range at Fircrest GC.  He and his wife, Shirley, are held warmly in the heart of WJGA.