The recipients were highlighted at the 101st WA Golf Annual Meeting on Saturday, October 15, 2022 at Yakima Country Club, site of the Association’s first Annual Meeting in 1922.

Herendeen took home a national title when he won the 2022 PGA Junior Boys’ Championship. Locally, he won the WIAA 3A High School State Championship and the WJGA Players Open, and finished second in the Washington Men’s Amateur, one shot back of the winner. He was the qualifying medalist at the PNGA Junior Boys’ Amateur, and made it to the semifinals. He qualified for the U.S. Junior Amateur, and made it to Final Qualifying for the U.S. Open. He tied for 15th at the Pacific Coast Amateur, where he was named to the WA Golf Morse Cup team. He had six top-25 finishes in AJGA events. Herendeen is a senior at Bishop Blanchet High School, and has already committed to play at the University of Illinois next fall.

At age 13, Zhang became the youngest player in the history of the championship to win the Washington Women’s Amateur. She also won the WJGA State Championship, and earned more points on the WJGA season-long Player of the Year Points List than anyone else in WJGA history, with many of the points earned early in the season while she was still just 12 years old. Zhang won three AJGA titles, and had four other top-10 finishes in AJGA events. In September she was the medalist at U.S. Women’s Amateur Four-Ball qualifying. 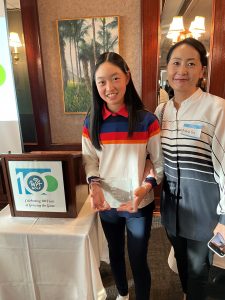 Angela Zhang and her Mother accepting the Girls’ POY award.