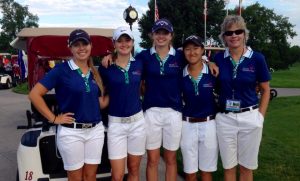 2014 WJGA alumns Sarah Rhee, playing for the University of Washington, and Sierra Kersten, playing for Stanford University, have advanced to the championship match at the NCAA D1 Women’s National Championship. Rhee and Kersten represented WJGA as team members on the 2014 Girls’ Junior Americas Cup held at Walla Walla Country Club.

Rhee, who holed out a bunker shot on the 19th hole to clinch UW’s semifinal victory, will play her finals match against former Curtis Cup team member Mariah Stackhouse of Stanford. Kersten, the 2013 and 2014 WJGA Girls Player of the Year, will play her finals match against UW’s Wenyung Keh. In all, five singles matches will determine the national champion team. Each match is worth one point with the winning team being the first to reach 3 points.

Live coverage of the final match will be on the Golf Channel beginning at 3pm today, May 25th, and online live scoring can be found at www.golfstat.com.