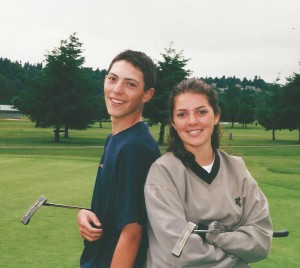 Brendan and Emily circa 2001

For siblings Emily and Brendan von Doehren, their rise in the golf industry can be traced to their roots in the game, and to their parents who showed them the enjoyment that comes from participation (As seen in the February 2016 issue of Pacific Northwest Golfer magazine) by Paul Ramsdell

If this article was to expand into a book, which it will not at this time at least, it would be difficult to slot into just one category for easy online shopping.  It would belong in the family category, but also sports, then business, then careers, and then a whole bunch of travel tossed in as well.

It’s the story of the von Doehren family of Auburn, Wash., which used golf to keep everyone together as a young family and now uses the business of golf as a launching pad for sky-rocketing careers as well as ever-expanding airline mileage accounts.

Here is the cast of characters:

Meet the parents – Jim and Jennifer von Doehren, who each retired in 2014 after long careers as school teachers with plenty of golf coaching tossed in as well.

Meet the daughter – Emily von Doehren, the senior director of regional affairs for the United States Golf Association, which would have to be considered a lofty position for a 34-year-old.

Meet the son – Brendan von Doehren, a senior manager for tournament business affairs with the Web.com and PGA tours at just 31 years of age.

The storyline starts out in fairly common fashion, with Emily and Brendan busy every summer in junior golf, and the parents doing their duty volunteering to help out with the Washington Junior Golf Association.

Soon thereafter, though, everyone gets off the mainstream highway. Because they enjoy it so much, the parents stick around and continue to volunteer with the WJGA going on 25 years now. And the kids weren’t just thinking about holing big putts and making their life’s living cashing those oversized tournament checks. They were more realistic than that.

“I always thought if I could ever get a job at the PGA TOUR, how cool that would be,” said Brendan, remembering his career ambitions as a 15-year-old.

“I knew there were some opportunities in and around the game that didn’t rely on my playing skills necessarily,” Emily said. “With a business background, I wondered if there was some sort of opportunities to explore that would enable me to continue to be involved and work in my passion, which was golf. It just sort of happened upon itself.”

It also happened because she looked into the USGA’s P.J. Boatwright Jr. Internship Program that provided her with a 12-month internship with the Southern California Golf Association. That turned into various positions with the SCGA over eight years.

From 2007 to 2011, she was the managing director of the International Association of Golf Administrators.

In 2012, she joined the USGA, and among the myriad of duties she is now in charge of the Boatwright Internship Program.

“It’s kind of a unique full-circle thing that has occurred,” said Emily, who now lives in New Jersey.

She oversees the six regions of the USGA, each of which has its own regional director.

“I’m basically the Golf House liaison, if you will, between the local level, the state and regional communities, and the rest of the USGA departments,” said Emily, who going forward will be leading the charge in a couple of monumental tasks as the USGA examines its handicap technology system and its workings with the state and regional golf associations.

For Brendan, being the assistant golf coach for nearly five years enabled him to get his MBA at Pepperdine. After that, he worked both with the Major League Soccer league office and the Chivas USA franchise in Los Angeles, dealing with player contracts and salary caps.

But getting into the business end of golf was a desire, and it seemed realistic by seeing what his sister was accomplishing.

“Just to see her, whether it be USGA or SCGA, it was just another example of there definitely being jobs out there in golf that could be appealing to me,” Brendan said. “She’s definitely had a very quick rise at the USGA.”

Last March came the opportunity for Brendan to join the PGA TOUR and move to Florida, where he handles relationships with a dozen Web.com Tour events.

“I’m a liaison for the Tour trying to help support in all ways possible the local effort – that being sales, that being marketing, that being anything,” Brendan said.

“I’m thrilled with where he has landed now,” Emily said. “I think he’ll really enjoy himself now back in golf, because it’s so much a different culture working in the golf community compared to other sports industries.”

Back home in Auburn, watching these two careers take off higher than the golf ball off a full swing with a 64-degree wedge from Bubba Watson, has been the parents.

“It’s a joy,” said Jim. “It’s a pleasure and really is gratifying that they are enjoying their work and the fact they are in an area that’s been a real social focus of our family for a long time. It’s great that they are doing so well on their own.”

Should the parents take credit for pointing them down the proper paths? Jim’s not so sure.

“Quite honestly, we’re thrilled to death of their success that they basically should take total credit for,” he said.

Still, a household filled every summer with manual scoreboards, tee sheets all over the place and official scorecards ready for the next junior tournament had to have an impact.

“Summers were a lot of fun, a lot of travel going to golf tournaments,” Emily said.

At those tournaments, Emily and Brendan would play their competitions while Jim and Jennifer did their administrative duties.

“It was a challenge for us to watch them play because we were running the tournament. We didn’t get an opportunity to do a lot of that, but that was fine. We got it,” Jim said.

“Yeah, I can recall, quite vividly, their tireless efforts, sun up to sun down,” Emily said.

“When they were finished playing, we would ask them to help us, and they would help us in little ways,” Jim said. “I think they saw how we enjoyed being involved in golf and preparing it, and administering it, and trying to be fair and equitable and those types of things.”

It had an impact.

“They were a great example of how you can be connected to golf in many ways other than playing,” Brendan said.

The family still stays connected, and that’s where all the airline mileage comes in. Emily and Brendan compared and almost brag about mileage totals about once a week. The parents have been Emily’s guests at the past four U.S. Opens, and plan on a fifth this summer. Before that, though, they’ll head to the Players Championship to see Brendan in action in May.

“We’re going to mooch off both of them,” Jim said, proudly.

Paul Ramsdell is the executive director of the Western Washington Golf Course Superintendents Association. In 2008 he received the Distinguished Service Award from the Northwest Golf Media Association.